This code implements the BAT optimization algorithm which is useful in various linear, non-linear optimization problems. This repository shares the free MATLAB code with full implementation of this paper.

The paper published byÂ Yang, X. S. (2010). “A New Metaheuristic Bat-Inspired Algorithm, in: Nature Inspired Cooperative Strategies for Optimization (NISCO 2010)”.Â Studies in Computational Intelligence.Â 284: 65â€“74 is implemented at https://free-thesis.com. A demo version of this is available hereÂ but we found it hard to use in any application. So developed in house full BAT code and happy to share here.

The Bats have some echolocation characteristics by using them we can develop an Algorithm for the optimization. Some rules for the Bat algorithm explained below.

The Matlab coding for the Bat function done by consider various parameters. Various steps are involved for the Bat coding.

In above statement the input parameter is mainly a benchmark function which is represented by a â€˜fobjâ€™ and others are lb=lower bound limit and ub=upper bound limit , fmax is the maximum frequency and fmin is the minimum frequency , A= loudness of each Bat, r=pulse emission rate of each Bat, alpha and gamma are the constants for the loudness and pulse emission rate. The r0 is the initial pulse rate.

In initialization upper bound and lower bound limits are available and bats position is randomly search. Each bat has different upper and lower bound limits. There is N number of searching variable. Calculate the initial position of the search variable. We initialize the parameters of algorithm, generate and also evaluate the initial population, and then determine the best solution Â in the population. Here, virtual bats are moved in the search space according to updating rules of the bat algorithm.

Step3. Call the benchmark function here which is represented by the â€˜fobjâ€™and find the initial best fitness value for benchmark objective function.

The initial best value is obtained

Also find the best solution for the best fitness value of the objective function.

Step4. Then start the main loop for the maximum iterations. Randomly choose the frequency as equation

Step5. Check the condition of pulse rate emission of each bat (r). The factor 0.001 is limits the step size of the random walk.

In the general context of exploration and exploitation as well as genetic operators, we can analyze the roles of the main components of the standard BA. In essence, frequency tuning essentially acts as mutation because it varies the solutions mainly locally. However, if mutation is large enough, it can also leads to global search. Certain selection is carried out by applying a selection pressure that is relatively constant due to the use of the current best solution found so far. Compared with genetic algorithms, there is no explicit crossover; however, mutation varies due to the variations of loudness and pulse emission. On the other hand, the variations of loudness and pulse emission rates can also provide an auto zooming ability in the sense that exploitation becomes intensive as the search is approaching the global optimal. This essentially switches an exploitative phase to an exploitative phase automatically

The graph and curve which are obtained by using the BAT algorithm for the optimization of benchmark function.

We recommend our users to use the hybrid PSO-GWO optimization algorithm whose code is published here. https://free-thesis.com/product/hybrid-particle-swarm-and-grey-wolf-optimization/ 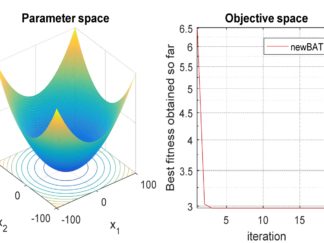