The credit card fraud detection is emerging risk field with more and more presence of user’s on internet. With the introduction of Digital India movement, online payments and money transfer is increased. This all raises a group of people who defraud the online activities. So the need of credit card fraud detection and prevention is utmost required. In our work we proposed a novel algorithm to detect the credit card. The method is using machine learning algorithm as main along with evolutionary optimization algorithm to improve the performance of neural network (NN).

The downloaded package will contain:

Note:  We don’t claim the documentation file to be plagiarism free and neither support to copy this code for your academic submission. This is to ease your pain to start writing code from scratch. We suggest to modify the code for your work.

NN is an iterative process which changes its input weights and biases to achieve the minimum mean square error (MSE). It is using feedback propagation loop which is using Lquenberg algorithm. This algorithm iterates locally which means it doesn’t guarantee the convergence of all minima points. it may skip some combinations of input weights and biases which may reduce the MSE more. To avoid this issue we have adapted the optimisation method named Gravitational Search Algorithm (GSA) which is explained in previous chapter. It is based on the movement of celestial bodies and position of these agents are input weights and biases in our case. The output of NN is calculated by formula.

where IW are the input weights and B are the biases. The number of input weights and biases depends upon the number of hidden layers. The GSA algorithm is supposed to tune these values. For this purpose first the Neural network is created in MATLAB. That network will be used further for optimisation algorithm. We have use the German dataset downloaded from UCI machine learning repository [30]. This dataset contains 20 attributes along with a label of good and bad. If label is 1, those attributes are for non fraud case and vice versa. We have used German Credit Score Dataset. In out proposed algorithm of optimised neural network we need the numeric dataset, so this dataset in numeric format is also available on the same web link.

A complete step by step algorithm is explained below.

the velocity in this case is calculated by using acceleration which is based on force and mass calculated in previous step.

By following the methodology the accuracy improvement over RBFNN is

Table: % improvement of GSA tuned NN over other algorithms 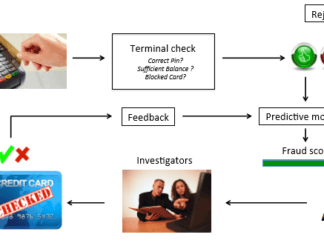