Energy Auditing of Rice Mill by Improving the Power Factor

In this study the subject of investigation is the energy auditing of a major rice manufacturing plant Dunar Rice industry by improving the power factor of its motors. This plant includes a 22KV substation and 1 MW diesel plant. The installed capacity is 16,425Tons Per Annum (TPA). This work is based on the work done by M. Kumar in 2013. In his work he has considered the Dunar ricer mill as his research place and so we have also followed that. In this work, keeping above points in mind and to tackle the load imbalance problem or in more technical term to increase the power factor of motor, following will be our key objectives:

Load capacitors will be installed at each motor to improve the power factor. Before installing capacitors at load of motors, the size and rating of each capacitor is to be finalised so that minimum cost in installation occurs.

Parameters of motors which were calculated in the reference work will be again calculated after capacitor bank installation and compared with calculated parameters of rewound induction motors.

Calculation of optimum capacitor size and rating to have minimum expenses and running cost, a bio optimised technique named Bacterial foraging optimisation (BFO) will be used which will consider total expenses in capacitor installation in the form of objective function which is to be minimised. Minimum cost will leads to more saving.

Dunar rice mill is using induction motors and if the load applied to induction motor is purely resistive then current flowing will be totally in phase but this is not the case as load cant be pure resistive in practical. The motor has magnet and magnetic current cant be in phase with voltage as magnetic current produces flux which is out of phase to provide rotation to shaft. Because of this phase difference in induction motor, rice mill suffers from distribution losses. This phase difference is also called the power factor.
So

Power factor correction is the term given to a technology that has been widely used restore the power factor to as close to unity as is economically viable. This is normally achieved by the addition of capacitors to the electrical network which compensate for the reactive power demand of the inductive load and thus reduce the burden on the supply. There should be no effect on the operation of the equipment.To reduce losses in the distribution system, and to reduce the electricity bill, power factor correction,usually in the form of capacitors, is added to neutralize as much of the magnetizing current as possible.Capacitors contained in most power factor correction equipment draw current that leads the voltage, thus producing a leading power factor. If capacitors are connected to a circuit that operates at a nominally lagging power factor, the extent that the circuit lags is reduced proportionately. Typically the corrected power factor will be 0.92 to 0.95. Some power distributors offer incentives for operating with a power factor of better than 0.9, for example, and some penalize consumers with a poor power factor. There are many ways that this is metered but the net result is that in order to reduce wasted energy in the distribution system, the consumer is encouraged to apply power factor correction. Most Network Operating companies now penalize for power factors below 0.95 or 0.9.

Improvement in power factor reduces the electricity bills, reduces the I2R losses and makes available extra KVA for the supply. Energy auditing of rice mill is a process to increase the saving of mill and if electricity bills of induction motors used in mill is reduced then savings per annum will increase automatically. Dunar rice mill is using five 15 hp induction motors, three 20 hp motors and six 50hp induction motors. If I2R losses in these are lowered then efficiency of motors are increased and electricity savings too. In our work the work done by M.kumar in 2013 is extended. In that rewinding of motors is done to improve its efficiency and later output is validated by neural network. But in our work following problem points will be discussed:

In the study of energy audit of the running equipment, we first see the visible abnormal symptoms in the inefficient transfer of energy in the system using the IIndlaw of thermodynamics. Smooth energy transfer from one form to other like electricity to the output shaft speed, belt transmission etc. does not produce abnormal heating, heavy noise,spark etc. If in the running equipment the transfer of energy takes place perfectly and unavoidable losses occur that are acceptable, then the quality and quantity of the output is good and there is less wastage of energy and output. If the transfer is not rightly done i.e. done with more avoidable losses, then productive output reduces, and waste output increases &dissipated in the form of heat, light, sound which is a sign of visible loss in the equipment operating parameters. For this process following steps are taken sequentially shown in figure. By following this action plan and analyzing all other electrical parts in the mill, it has been found that induction motors are the most energy leaking components in the mill. Parameters of each motors are calculated by measuring voltage, current and resistance. Others like sync speed, stator resistance, F&W losses are also calculated.

After observing the parameters it is required that losses in motor should be decreased. In our reference paper it is done my rewinding the induction motor. But another way can also be adopted for this. it has also been checked that capacitor installation along with motor will minimize the losses. We optimally chose the capacitor size with each motor and calculates it payback period using bacterial foraging optimization.

For the objective function of BFO energy loss cost and capacitor cost collectively minimized. For this following parameters have been considered:

The formula used to minimize the cost is given as:

The description of complete proposed work is represented in the form of flow chart in figure. 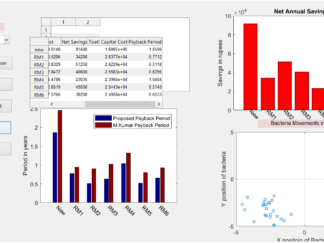