Note:  We don’t claim the documentation file to be plagiarism free and neither support to copy this code for your academic submission. This is to ease your pain to start writing code from scratch. We suggest to modify the code for your work.

Here at free-thesis.com,  we have developed fuzzy Logic MPPT control approach in our work work using MATLAB simulink with 2016a version. the simpower toolbox is the main on which our model is based on. The proposed work is compared with the previous work too which is using Incremental & conductance method and also developed in the same model. 10-6 seconds are considered as sampling simulation time. model view is shown in figure  which is the main modelling layer. In layers beneath it we have proposed MPPT control technique and I&C method. Each submodel is connected with the PV array with grid and boost converter which is fed by MPPT controlled pulse on gate terminal. Except MPPT method, rest model is same for both. The machine learning based algorithm provides efficient outcomes of control system.

The PV array plant generates the DC current and voltage and before putting it on distribution lines, it has to boost up. Boost converter does this task and to gain maximum power from the generating plant, fuzzy logic controller controls the boost converter to get as high power as possible. The boosted power is then transferred to grid and before that it is converted to 3 phase AC at point of common coupling (PCC). This coupling point is responsible for any disturbance in synchronisation of both plants. For stability these must be in sync. So a 3 phase converter is used at PCC which takes the grid voltage, current and DC voltage at PCC as input and a controllers gives the gating pulse to IGBT of this 3 phase converter. This controller is called voltage source controller (VSC). The stability of the whole system is analysed by the constant DC at PCC. If both grid and PV plant are in sync then this DC voltage will be constant else disturbed. As much constant and smooth will be this PCC DC voltage, as will be the controlled power generation. A table of plant parameters considered for designing and simulation is shown  in table 1.

Free-thesis.com used 66 arrays of PV cell in string and 5 PV cells array in series. Thsi combination is still non linear power generating and to analyse the voltage and current generation by complete array collectively, a V-V and P-V curve is plotted for different radiation intensity. Varying  temperature and solar irradiations are the input to the model.

Machine learning Fuzzy Logic based MPPT control requires some basic set of rules and input. WE have fed the fuzzy logic with error and change in error. Mathematically it is represented as:

The table for fuzzy rules is

Under machine learning fuzzy logic MPPt control the improvement in PV array output power is achieved and an improvement upto 1.3% is reached than incremental & control method. 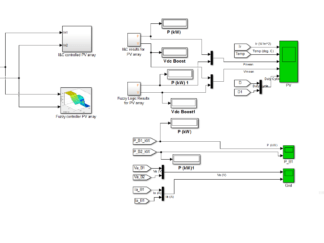