This free code is for hybrid GWOCS optimization algorithm which combines the global converging power of GWO with CS. We tested it on benchmark optimization functions and found GWOCS performing better than GWO alone. This repository includes:

GWO operates on the basis of hierarchy in the group. Once all wolves are initialized with some random feed then fitness function is calculated for each wolf. In a group, 10-20 wolves are considered. Out of them the one with minimum fitness function (as GWO works to reduce the distance between prey and wolf and optimal position is the prey position whereas CS works for maximization of profit ) is considered as leader of the group and \(\alpha_{wolf}\) , followed by two more wolf with corresponding decreasing fitness function as $$\beta_{wolf}$$ Â and $$\gamma_{wolf}$$ . The mean of these positions is considered as an optimal position of the wolf in that iteration.

Top three wolf positions are updated by equation 3.1 and 3.2 and the new position is the mean of these three. In GWO, to move towards the prey, the distance between prey and golf is minimized and changed over time. The step size by which wolf moves are randomly weighted by a constant which leads to falling it into local optima. This problem is solved by cuckoo search algorithm which updates the current position based on the best position so far. CS optimality more relies on other habitat groups rather than only time. To make it hybrid we updated the best three locations of wolves in the group by CS method which update it by a step of with angle. The step size is updated as:

‘step’ is the previous step size of the cuckoo movement

The position of the cuckoo is now updated as:

where is the deviation of the cuckoo and a random quantity

Using the above equation they are updated to new positions and handle will get back to GWO form CS. Now GWO takes mean of all three best positions again and tradeoff the local optima error in this hybrid.

The hybrid of Grey Wolf with Particle Swarm Optimization can also be checked here. 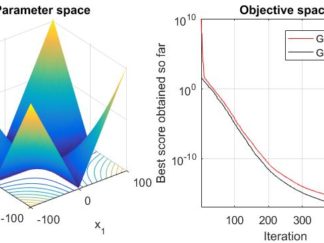