In this work we have enhanced the work done on Arnolds cat map encryption. The key used for encryption requires security and unpredictability. This work is done with help of modified logistic map. The key objective of this work was to study different chaotic map encrypting algorithms and to modify logistic map. It was concluded form literature review that security is enhanced if multidimensional chaotic mapping is used. The single dimensional logistic map is used to just produce encryption key. Even, weaknesses of simple logistic map is also identified in our work. Simple logistic map was periodic in nature and can be predicted easily by a smart hacker. So the periodicity is removed by using non linear equation in logistic map. Key generated by this is diffused into confused image by Bakers cat map. Results are checked on various parameters like histogram analysis, correlation coefficients etc. uniformity of encrypted image histogram shows the effectiveness of the proposed algorithm.

Note:We dont claim the documentation file to be plagiarism free and neither support to copy this code for your academic submission. This is to ease your pain to start writing code from scratch. We suggest to modify the code for your work.

For the large image, traditional image encryption algorithm such as data encryption standard (DES) is not suitable because of the weakness of low-level efficiency. The chaos-based encryption has suggested a new and efficient way to deal with the intractable problem of fast and highly secure image encryption. 1-D chaotic systems such as logistic maps are widely used, with the advantages of high-level efficiency and simplicity. But their weakness, such as small key space and weak securities, is also disturbing. During decryption, the exact decryption is not possible in this method as pixels value will be floating point by thus algorithm and because of that, some data loss occurs. Because of the exponential sensitivity of chaotic maps, it makes proper decryption of the original image impossible. A more frequently used 2D chaotic map is Arnolds chaotic map. Although it has proved itself to a good efficiency yet security is always a concern. The key generated for encryption of image can be hacked or guessed by intruders. It should also show more key sensitivity. A small change in key should affect the encrypted image.

During this work logistic map will be improved to make it non linear so that encryption key generated by this is unpredictable to hackers and it shows very less periodicity. This modified logistic key is diffused into arnolds cat map scrambled image.

Logistic mapping is the chaos mapping and in 1 dimensional problem it is defined as:

Here r is the system parameter which lies in between (0,4].When 1<, the solution of the system is fixed point. When 3 the formula starts the transition state, when 3.5699456, the system enters a chaotic state. As is often the case in dynamical systems theory, the action of the logistic map can not only be represented algebraically, as in above equation, but also geometrically. Given a point xn, the graph of the logistic map provides y = f(xn). To use y as the starting point of the next iteration, we must find the corresponding location in the x space, which is done simply by drawing the line from the point [xn, f(xn)] to the diagonal y = x. This simple construction is then repeated, as illustrated in Figure.

Figure:(a) Graph of the logistic map for = 2. (b) Graphical representation of the iteration of equation.

Since it is only dependent on r, so stationary and chaotic behaviors are shown by logistic map as in figure 2.

In this non linear function has been adopted to change the value of key continuously for security enhancement. So the modified logistic map is defined as the tangent function of xn as

The ranges of parameters r, a and b will be discussed as follows. Firstly, they are positive. Secondly, the absolute value of the slope of the curve at fixed point should not be less than 1, and xn+1 > xn when xn = 1/(1 + b), therefore r may be defined as

Finally, parameter l is obtained by experimental analysis ; as a result,

. So the NCA map is defined as follows: This image encryption code can be used in the following and other similar research papers. 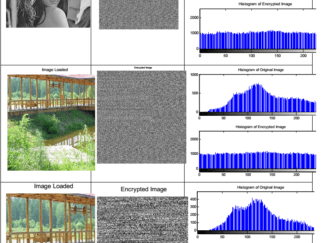