This MATLAB code improves the LEACH protocol for energy consumption minimization in WSN. We have used GWO optimization algorithm for this purpose. The new cluster head is elected with minimum intracluster distance, minimum energy consumption and the maximum number of nodes under its influence.

Note: The free version of this code has a limited 5 trials and few protected files. Once the 5 trials are completed, the code will be deleted and MATLAB will be closed.

A wireless sensor network (WSN) is used to monitor physical or environmental conditions. It consists of several sensors nodes that monitor the temperature, humidity, and light parameters. The received information is passed through the WSN to the base station. In WSN all the sensor nodes are powered by the battery which consumes high energy for the data transmission. This energy consumption can be reduced by using hierarchical approaches. We selected LEACH (Low-energy adaptive clustering hierarchy) scheme for the minimization of energy consumption.

LEACH[1] improves energy efficiency and increases the lifetime of the network. The clusters are formed in the LEACH scheme in which distributed sensor nodes are placed in a group. The sensor node has maximum residual energy selected as the cluster head (CH). All the cluster nodes transmit data to CH, and then CH is forwarded through the other CHs or directly to the base station. The cluster head selection procedure is not optimal in the LEACH scheme. So we proposed GWO optimization algorithm for the optimal selection of CH in the LEACH protocol.

LEACH is a MAC protocol implemented with clustering and a simple routing protocol in WSN. The key function of LEACH is to minimize the energy consumption necessary to form clusters to increase the lifetime of WSN. Most of the sensor nodes transmit to the cluster head in the LEACH protocol. The cluster head compresses the received sensor nodes’ data and forwarded it to the sink node (Base Station). The remaining nodes of the clusters communicate with the cluster head in the TDMA (Time Division Multiplexing Access) manner as per CH generated scheduled [1].

The working of LEACH is divided into two phases. The first phase is the setup phase in which clusters are formed in WSN. The second phase is known as a steady phase in which information or data is transferred to the sink. The cluster head selection phase and clustering phase are the key parts of the LEACH protocol. Each sensor node is having threshold energy as per the formulation

In equation 1, p is cluster head percentage in all nodes, r is the round and G is the set of non-selected cluster head nodes.

The energy model is followed by LEACH protocol with the two-channel model; free space (d2) for single hope path and multipath fading (d4) for the multihop path. So the energy consumption of l bit packets over distance d is estimated as

Where efs = free space energy loss, emp = multipath fading loss, d= distance between source and destination node, d0= crossover distance =square root of (efs/emp). The energy variable depends on the node distance, so via optimizing node distance, we can minimize the energy consumption at every sensor node in WSN.

An objective function is necessary for the optimization algorithm. It must satisfy the condition and constraints of the design network. As per equation 2 the energy depends on the distance of sensor nodes, so the objective function shows the relationship between energy and distance variable. Equation 3 shows the fitness function of the LEACH protocol

Here a1 and a2 are the tradeoff factors, and their fixed value is considered as 0.4. The objective function shows the energy consumption with respect to the node distance.

The MATLAB code for the objective function on LEACH optimization is written below. This is a generalized function and can be used with any optimization technique. For full details, you can download the product.

We developed a MATLAB script of the GWO algorithm to optimize the above mention objective function. GWO is inspired by the food searching behavior of grey wolves. The wolves are attacks in a group and the best position of any wolf can provide the best solution. We call the objective function in GWO script and get the optimal or best solution in terms of the consumption energy of sensor nodes. The position of the grey wolves updated the position of the cluster head of LEACH protocol. 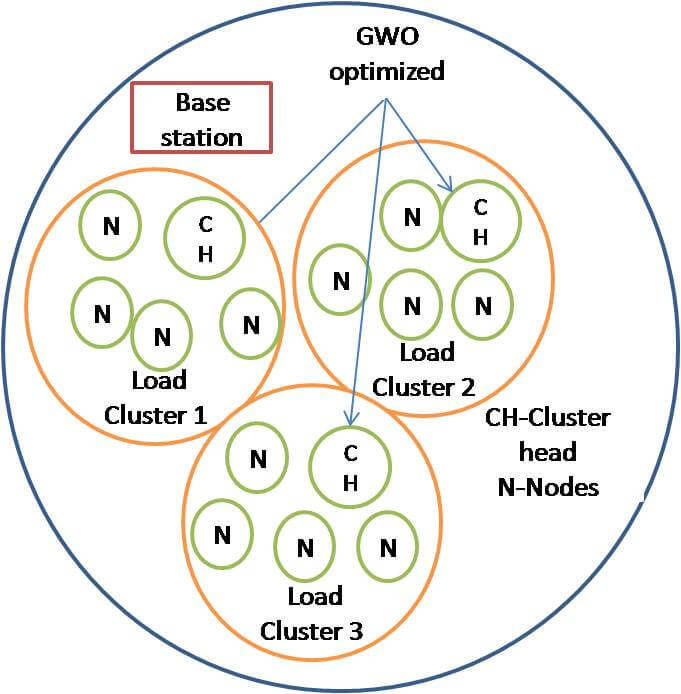 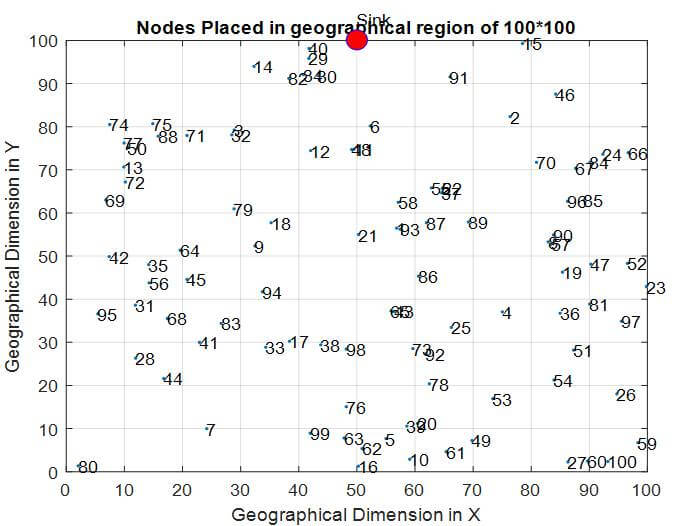 In this work, we minimize the energy consumption of sensors in the Wireless Sensor Network (WSN). The configuration of the WSN environment is done as per the LEACH (Low-energy adaptive clustering hierarchy) protocol due to efficient energy and network lifetime. In LEACH protocol the distributed sensor nodes are placed in a group or cluster. A sensor node of the cluster is selected as the cluster head which has maximum residual energy. The cluster head selection is not efficient or optimal in LEACH, so we used a Metaheuristic algorithm called Grey Wolf Optimization (GWO) to select cluster head. The energy consumption of the sensor node is minimized by GWO optimized LEACH environment.

24 reviews for Modified LEACH Protocol with GWO Optimization in WSN 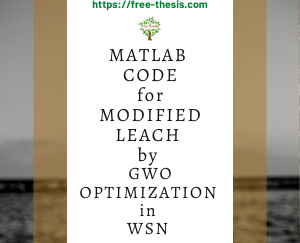 You're viewing: Modified LEACH Protocol with GWO Optimization in WSN $0.00
Rated 5 out of 5
Download Code
×