In object tracking various problem come in the way, one of them is the light intensity variation which results in false tracking of object.Â Thatâ€™s why we develop an algorithm which is resist to illumination variation and gives rise to correct tracking of object. For this we developed a threshold algorithm which can compensate the illumination variation. This also reduces the time consumed in operation.

Moving object detection in videos has improved a lot in recent years. The challenge in moving foreground object extraction is a very dynamic background. A background subtraction technique is used to construct reliable background information from the video sequence. Then, each incoming frame is compared with the background image. If the luminance value of a pixel differs significantly from the background image, the pixel is marked as a moving object; otherwise, the pixel is regarded as background. The adaptive background threshold algorithm is used which uses gray level co-occurrence matrix and local mean to calculate the threshold value corresponding to each pixel. This is called local processing and results are compared with global processing like otsuâ€™s threshold method. Shadow effect is a problem in many change detection-based segmentation algorithms. In the proposed algorithm, a morphological gradient operation is used to filter out the shadow area while preserving the object shape. In order to achieve the real-time requirement for many multimedia communication systems, our algorithm avoids the use of computation intensive operations.

In our work because of this human visual system local contrast map is extracted from an image and then on the basis of that a local threshold approach will be used to convert the image onto binary format. Previously image gradient and normalize image gradient were used to extract local contrast of image, these methods are quite good, although the variation of bright to weak contrast can be compensated by these methods yet these donâ€™t perform well in case of document which have bright text. This is because a weak contrast will be calculated for stroke edges of the bright text. Calculation of local contrast and then global threshold algorithm like otsu is used and then local image edge detection is used in paper published by Bolan Su (2013). We have followed the same line of action but rather than using global threshold, we use local threshold, it removes the need of using again local edge detection algorithm like canny edge detection. Gray level co â€“occurrence matrix (GLCM) also called texton co- occurrence matrix (TCM) fulfills our purpose. It is a local contrast mapping method.

Video can be considered as multiple frames. Each frame is different from other in pixel values. But those which are equal are treated as background pixels as background donâ€™t moves but there is problem when background consists of slow moving objects like swaying of trees which must be considered as background, but due to difference of each frame to next frame these also appear into foreground as pixels value changes for these too. To avoid this problem we have used multi background registration concept. In this frame difference mask along with background difference mask is generated and both are used to decide which is pixel constitutes the foreground. Here is the work given in detail:

A flow chart for image background subtraction by proposed work is shown in figure 1 whole algorithm is divided into four steps at free-thesis.com: In Frame Difference, the frame difference between current frame and previous frame, which is stored in Frame Buffer, is calculated and thresholded. It can be presented as

where I is frame data, Â Â is frame difference, and is Â Frame Difference Mask, â€˜tâ€™ represents the time of coming frame, â€˜t-1â€™ is for previous frame. Note that there is a parameter Â Â needed to be set in advance. The method to decide the optimal is discussed in section 3.1. Pixels belonging to FDM are viewed as â€œmoving pixels.â€ This can be written in MATLAB as

In IOM every frame is passed through morphological imclose operation which will fill the pixels in 3*3 neighborhood.

In post processing work done till now is used conditionally to extract background and foreground separately. These conditions are shown in table 1. 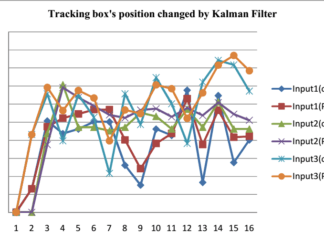