This MATLAB code is for the improved TEEN protocol in WSN. The BAT optimization tunes the CH selection to minimize the energy consumption in the TEEN. This repository contains the:

This article discusses the optimized improved TEEN (Threshold-Sensitive Energy Efficient Sensor Network protocol) routing protocol in WSN. A MATLAB code is written for improved TEEN and evaluation is done on the criteria of residual energy, total alive nodes and total packet received. An extensive comparison with the conventional TEEN with improved TEEN is also presented after code execution.

A wireless sensor network (WSN) has been detected as an economical solution for monitoring applications. The working principle of WSN is sensing physical quantities like temperature, humidity, radiation and pressure. The consumption of energy in WSN operation is high due to its sensing and transmission capabilities.

In this work, we select TEEN routing protocol to reduce the energy consumption of data transmission. The TEEN routing protocol improves the energy efficiency and lifetime of the network. A cluster formation process is arriving in the TEEN protocol for the sensor nodes. The sensor node has maximum residual energy selected as the cluster head (CH). The cluster sensor nodes transmit the data to CH, and CH transmits the received data to the base station. The cluster head selection in the improved TEEN protocol is made by the BAT optimization algorithm [5].

The testing of the BAT optimization algorithm for different benchmark function MATLAB code is available at free-thesis.com

The cluster head selection procedure of the TEEN protocol is similar as in LEACH protocol. The TEEN clustering routing protocol specifies two thresholds known as Hard threshold and Soft threshold. These two specific values represent the range of calculated values and variation of measurement value before and after. Some reactive and active modes are added, which can’t collect the data only to inform base station but reacts quickly during the changing environment. The formulation of the TEEN routing protocol is completed in two phases [4].

The initial step is known as the setup phase for the cluster formation in WSN. The transmission phase is known as the steady phase that sends data information to the sink nodes. The sensor nodes present in the TEEN protocol has threshold energy

P is cluster head percentage in all nodes,  is the round and set of nonselected cluster head nodes. The energy model is followed by TEEN protocol with the two-channel model; free space (d2) for single hope path and multipath fading (d4) for the multihop path. So the energy consumption of  bit packets over distance d is estimated as

Where efs = free space energy loss, emp = multipath fading loss, d= distance between source and destination node, d0= crossover distance =square root of (efs/emp). The energy variable depends on the node distance, so via optimizing node distance, we can minimize the energy consumption at every sensor node in WSN. The Hard Threshold (HT) and Soft threshold (ST) are the limits of the constraints to the transfer data. If the sensed value of nodes is beyond the attribute value, then it is on the transmitter way and reaches to the cluster head. The small variation in the sensed attribute is known as the soft threshold, which means the node is a trigger and transmits the value.

The α1 and α2 are tradeoff factors and decide the weightage of distance and energy variables.

All BATS [5] use echolocation to measure distance and also know the difference between food and background barriers. Bat flies randomly have a velocity at a fixed position, with fixed frequency and increasing wavelength and loudness to search for food. The wavelength of bats emitted pluses is adjusted automatically and adjusts the rate of pulse emission. The loudness of bats varied from a higher range to a constant minimum range. The main task of optimization is that allocate cluster heads in each cluster. The node which consumed less energy in data transmission and reception is selected as the cluster head. The BAT algorithm minimizes the objective function written in equation 3. The position of Bats allocates the position of cluster head in each cluster.

Steps of the proposed method

All the scripts and WSN environment are developed in MATLAB 2018 software. The TEEN clustering routing protocol specifies two thresholds known as Hard threshold and Soft threshold. These two specific values represent the range of calculated values and variation of measurement values before and after. Some reactive and active modes are added, which can’t collect the data only to inform the base station but reacts quickly during the changing environment. The formulation of the TEEN routing protocol is completed in two phases. The initial step is known as the setup phase for the cluster formation in WSN. The transmission phase is known as the steady phase that sends data information to the sink nodes. Following steps are involved in the optimization of TEEN using BAT algorithm;

A similar product Modified LEACH in WSN to Reduce Energy Consumption is available on the Free-thesis.com 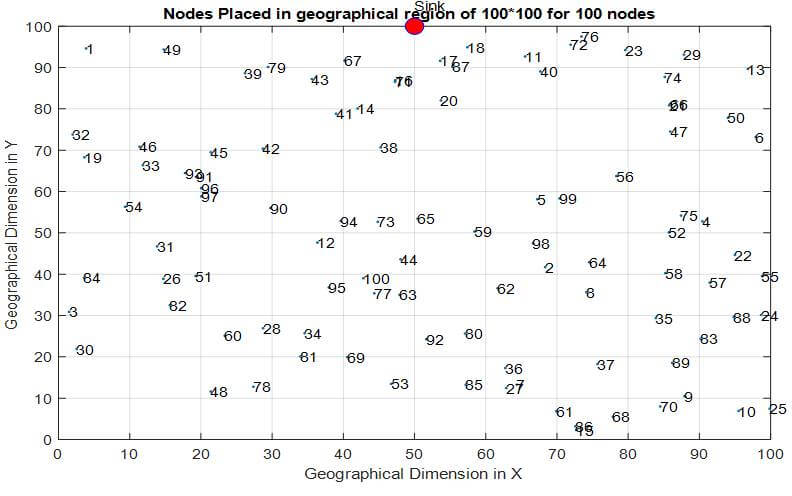 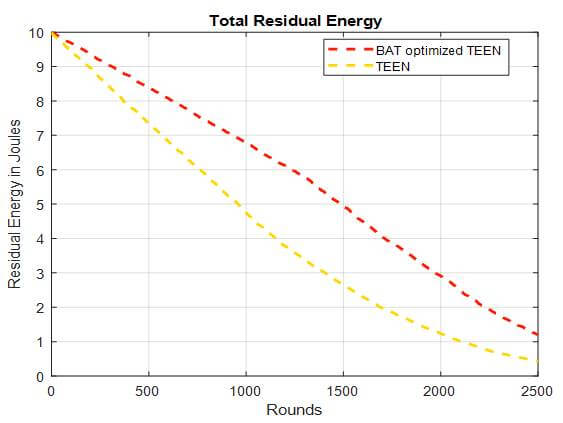 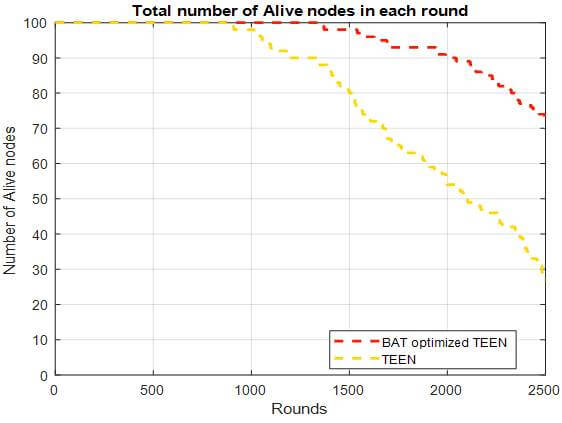 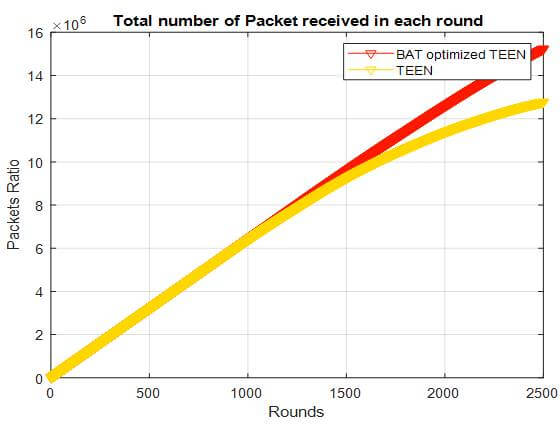 In this code, efficient TEEN routing is performed by BAT optimization algorithm. The improvement in residual energy and network lifetime is provided by BAT optimized TEEN protocol. The cluster head selection plays an essential role in terms of energy consumption.  In TEEN protocol the cluster head selection is made with the BAT algorithm. The proposed BAT optimized TEEN algorithm is compared with the standard TEEN routing protocol. 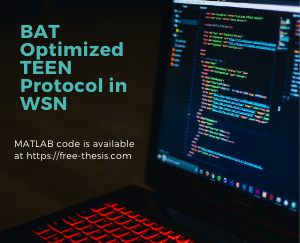