The first contribution of the work is to present three alternative analytical expressions to identify the location, size and power factor of a single DG unit with a goal of minimizing power losses. These expressions are easily adapted to accommodate different types of renewable DG units for minimizing energy losses by considering the time-varying demand and different operating conditions of DG units.

Second objective is to minimize the cost of plantation of renewable energy source at the buses with high losses. This cost also must be minimized in co ordination with losses minimization. A meta heuristic algorithm, firefly optimization is used for this purpose. Results are compared with the other metaheuristic algorithm, widely used in literature, particle swarm optimization (PSO). Comparative results in form of losses and voltage profile improvement shows effectiveness of our algorithm.

Note:Â Â We donâ€™t claim the documentation file to be plagiarism free and neither support to copy this code for your academic submission. This is to ease your pain to start writing code from scratch. We suggest to modify the code for your work.

Power loss minimization in the distribution system is becoming very important. Distribution generators are optimally placed in the system to mitigate losses. But the cost incurred in the installation of extra generators can also increase the total cost that may be more than the cost due to losses. So a trade-off must be there in installing the extra generator so that losses decrease, as well as cost, also reduces.

If extra generators are installed on each bus in the system, it will definitely increase the cost, and losses cost will be less than that. So it is necessary to choose some potential buses at which generators can be placed. For this purpose, the sensitivity index is calculated in our work. It will arrange all buses in the decreasing order of power losses. Then as per the cost minimization and losses minimization, a number of buses which art at top of the list can be chosen and generators will be installed only on that. The detailed mathematical formulation of the sensitivity index is discussed in section 1. after locating the potential buses which are having high loss, the problem of placing the right size generator is rising face. Optimal sizing of the generator reduces cost and losses significantly. For this purpose, we have used an objective function that considers the losses minimized as well as cost minimized for the purposed case. It has been divided into two parts: technical constraint, economical constraint. The description of it is provided in section 2. This objective function is minimized using firefly optimization and compared with particle swarm optimization (PSO). The theoretical approach of these algorithms is must be studied in their research papers.

When there was no noise on the process yields, the performance of both algorithms PSO and FFA seem to be not so different to approach to the optimum. FFA tends to be better, especially on the functions having multi-peaks. The complexity or difficulty level of the functions had no effect on the FFA as expected except on the Camelback function. However, execute time in each replication is dramatically higher when they are compared, especially on the functions having a curved ridge or mixed curved ridge and multi-peak. PSO seems to be better in terms of speed of convergence. This might be due to the effect of generating completely different random numbers to be used in the iterative procedures of the algorithm. This implies that the FFA is potentially more powerful in solving noisy non-linear optimization problems. The FFA seems to be a favorable optimization tool in part due to the effect of the attractiveness function which is unique to the firefly behavior. The FFA not only includes the self-improving process with the current space, but it also includes the improvement among its own space from the previous stages. Also, Firefly is better than PSO in terms of the time taken for the optimum or near optimum value to be generated provided a certain high level of noise

So we here used firefly optimization for power loss minimization which is good for multi-objective optimization. Care has to be taken that same capacity DG can’t be connected on a single node. However multiple DG can be connected on a single node but these should be of different capacities. The flow chart of the proposed work is given in section 3.

The sensitivity factor method is based on the principle of linearization of the original nonlinear equation around the initial operating point, which helps to reduce the number of solution spaces. The loss sensitivity factor method is mainly used to solve the capacitor allocation problem. Its application in DG location is new in this field and has been reported in [1]. The real power loss in the system is given by the â€œexact lossâ€ formula. The sensitivity factor of real power loss with respect to real power injection is obtained by differentiating the exact loss formula with respect to real power injection at bus Pi which is given by:

Sensitivity factors are evaluated at each bus, firstly by using the values obtained at base case load flows. The buses are ranked in descending order of the values of sensitivity factors to form a priority list. The total power loss against injected power is a parabolic function and at a minimum of losses, the rate of change of real power loss with respect to real power injection becomes zero.

where Pi represents the real power injection at node i, which is the difference between real power generation and real power demand at that node.

where PDGi is the real power injection from DG placed at node i, PDi is the load demand at node i, combining above equations we get

The above equation determines the size of the DG at which the losses are minimum. By arranging the list in ascending order, the bus stood in the top is ranked as the first location of DG and further, the process is repeated by placing the concerned size of DG at that particular location which generates the next location of DG. The process is said to be terminated when it determines the same location.

where Vk is the voltage at kth node and N is the number of nodes. The node with the least BVSI will be chosen for DG placement.

The objective of the optimal size and location of DG problem to minimize the total power loss and voltage profile can be expressed as: The objective function is subjected to the following constraints.

It is well known that a small change in nodal voltage affects the flow of reactive power whereas active power practically does not change. Further, the operating voltage at each node must be in the safety range as given below.

Power flow in each branch must be less than or equal to its maximum capacity as given below.

The flow chart of the process is shown as 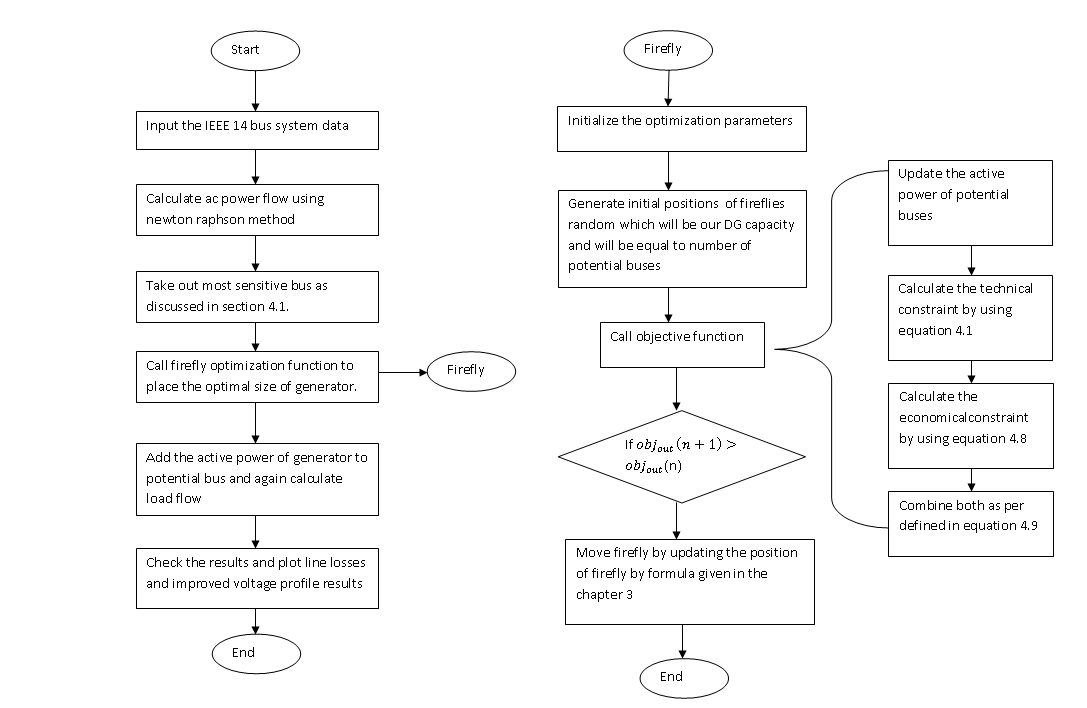 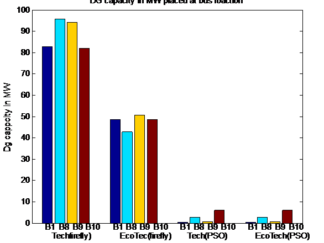 You're viewing: Optimal Placement of Distribution Generators in IEEE 14 Bus System $180.00
Rated 4.50 out of 5
Download Code
×